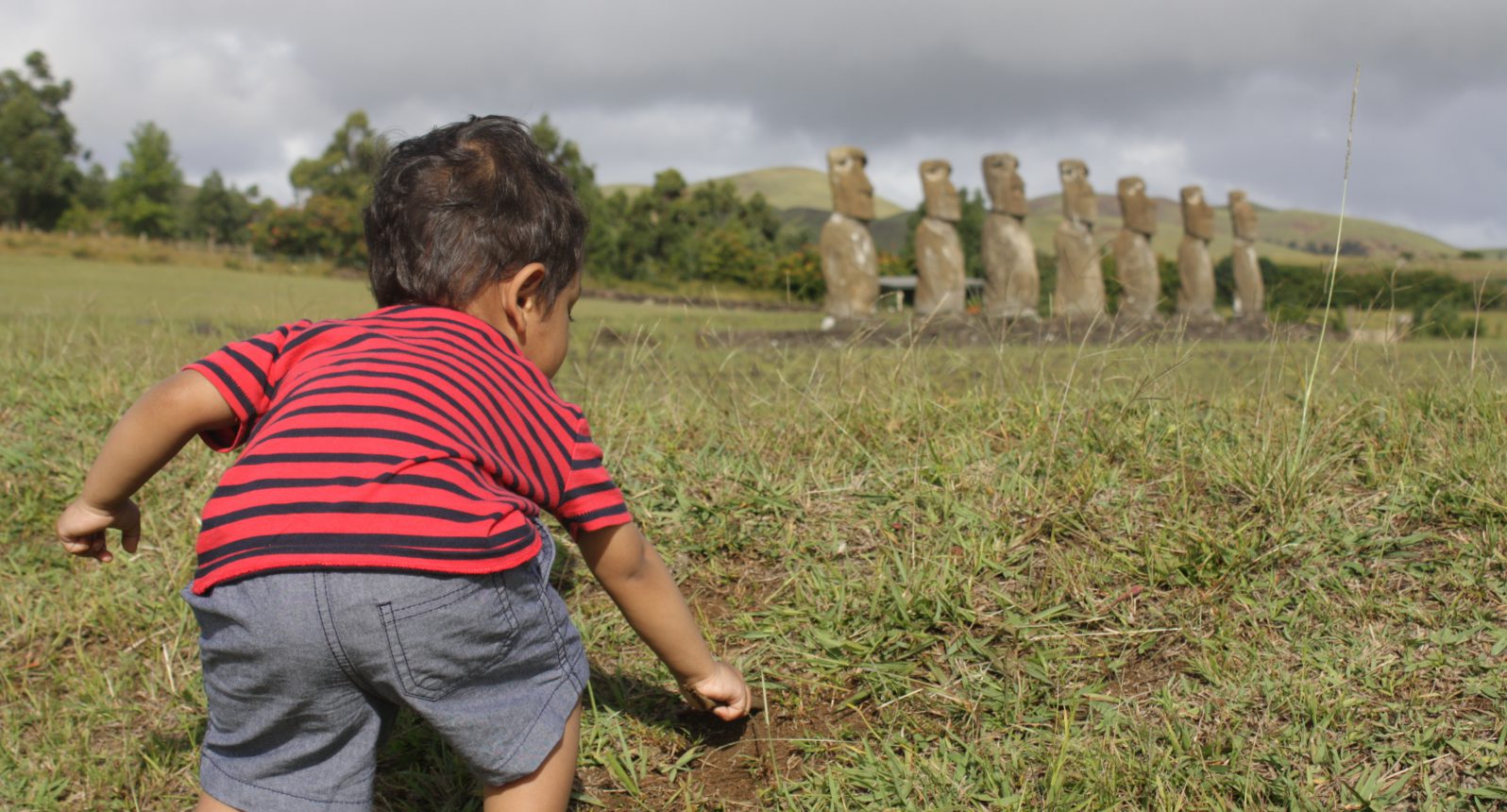 The Secrets of the Moai

As a 12-year-old, I used to obsessively watch Jonny Quest, an animated series about the adventures of a teenage boy and his scientist father. Out of all the episodes I must have watched all those years ago, scenes from one particular episode remains imprinted on my mind – the images of grey, monolithic heads protruding from a field of burnt grass. And it was these images that appeared, unbidden, as I pondered whether it would be worth the price tag or the hassle of dragging my family to the most isolated place on earth. A month later, I found myself standing before the Moais of Easter Island.

Despite my obsession with the Moai, my knowledge on the subject was sadly, largely lacking. Years of trawling through books and encyclopaedias, and more recently, Google, didn’t seem to have amounted to much. What I learnt on Easter Island (Rapa Nui to islanders), has completely boggled my mind. Although encumbered by a rambunctious toddler, I managed to glean the most information from the following sites:

It was at Ahu Akivi where I first lay my eyes on the Moai. Before coming to this site, I had no concept of the ahu (ceremonial platform) or that each platform could host more than one Moai. Seven Moai, of roughly the same size, stood on the platform, facing the ocean. My ignorance didn’t allow me to spot the irregularity in this, but I soon learnt that all the Moai erected on the island looked inwards, away from the ocean, as if they were standing watch over the island. These Moai are also the only ones erected inland and is presumed to have acted as a celestial observatory.

As I inspected the giant statues closer, I realised with something akin to shock, that they weren’t just heads as I’d presupposed; there were arms too, barely recognisable due to erosion, and etchings on the backs of the statues to show hands clasped behind. The Moai still standing on Easter Island were a more complete depiction of the human form than I had thought.

When archaeologists found the Moai here, as with the Moai elsewhere on the island, they had all toppled to the ground. It is thought that invaders had knocked them down as a show of might and symbolic of their conquest. Our guide attempted to explain the archaeological feat it took to restore the statues, resorting to elaborate hand gestures to motion digging and pulling a pulley. Out of the corner of my eye, I noticed my two year old picking up a stick and attempting to dig into the ground, as the guide had just mimicked. Excited by his interest, I asked him if he was digging up the Moai, to which he contemptuously replied, “No. Dinosaur bones.” Perhaps best to wait a few more years before enlightening him about the secrets of the Moai.

Ahu Tongariki, is the largest platform on the island with 15 Moai statues, in various shapes and sizes. It is here that I learnt about the Moai topknot. The Moai are thought to represent chieftains and other powerful men. It was customary for tribal chiefs to have a red topknot. One Moai at Ahu Tongariki sported a large rock on its head, meant to represent the topknot.

The site also contains remnants of old petroglyphs, some of which I was able to scrutinize at close quarters while unceremoniously changing my son’s nappy in the open fields. While we weren’t expecting to find baby changing facilities on this remote island, we certainly didn’t think we’d be doing so under the watchful gaze of the Moai.

Rano Raraku or the Moai ‘nursery’ as it is often dubbed, is the quarry from which all the Moai on the island had been carved. The outer slopes of this volcano is peppered with hundreds of Moai, in various stages of completion. It is also where those images, long imprinted on my mind, are from.

The prospect of actually standing in Rano Raraku filled me with such excitement that I failed to sleep the night before. I was fidgety, nervous even, on the bus ride to the site. Before the bus had rolled to a complete stop, I leapt out, leaving my poor husband to coax my toddler to climb into the baby carrier for the trek up the hill. We were lucky to be the only English-speaking people on the tour, so we had one guide just to ourselves and he gamely allowed us to set our own pace and navigated us away from other tour groups. And that’s how I found myself, seemingly all alone, staring up at the ancient and mystical Moai. I had met an Englishwoman the day before, a sculptor, who insisted she could “feel the magic” when facing the Moai. As I stood in front of a 30 foot statue, I felt an inscrutable power. Perhaps it was incredulity I felt, stood where I was with the waves crashing in the distance, but it was mystical. The feeling was palpable.

I was brought back to reality as a small voice exclaimed besides me, “Look Mama! Mo-aai!” My son had conquered the trail to join me. The rest of the morning was spent meandering through grassy knolls and scrambling up trails, trying to spot some of the most remarkable Moai at Rano Raraku. The largest, 71 feet in length, lay prostrate and incomplete. It is presumed that it was too large to be carried out of the quarry, so the islanders gave up on it. Tukuturi is another statue that is an anomaly, as the only statue that is seen squatting, with its hands on its thighs, presumably in prayer or as part of a musical ritual.

A short hike over the top and into the crater afforded us stunning views of a handful of smaller Moais watching over a sun-speckled lake. If there’s one place you visit on Easter Island, make it Rano Raraku.