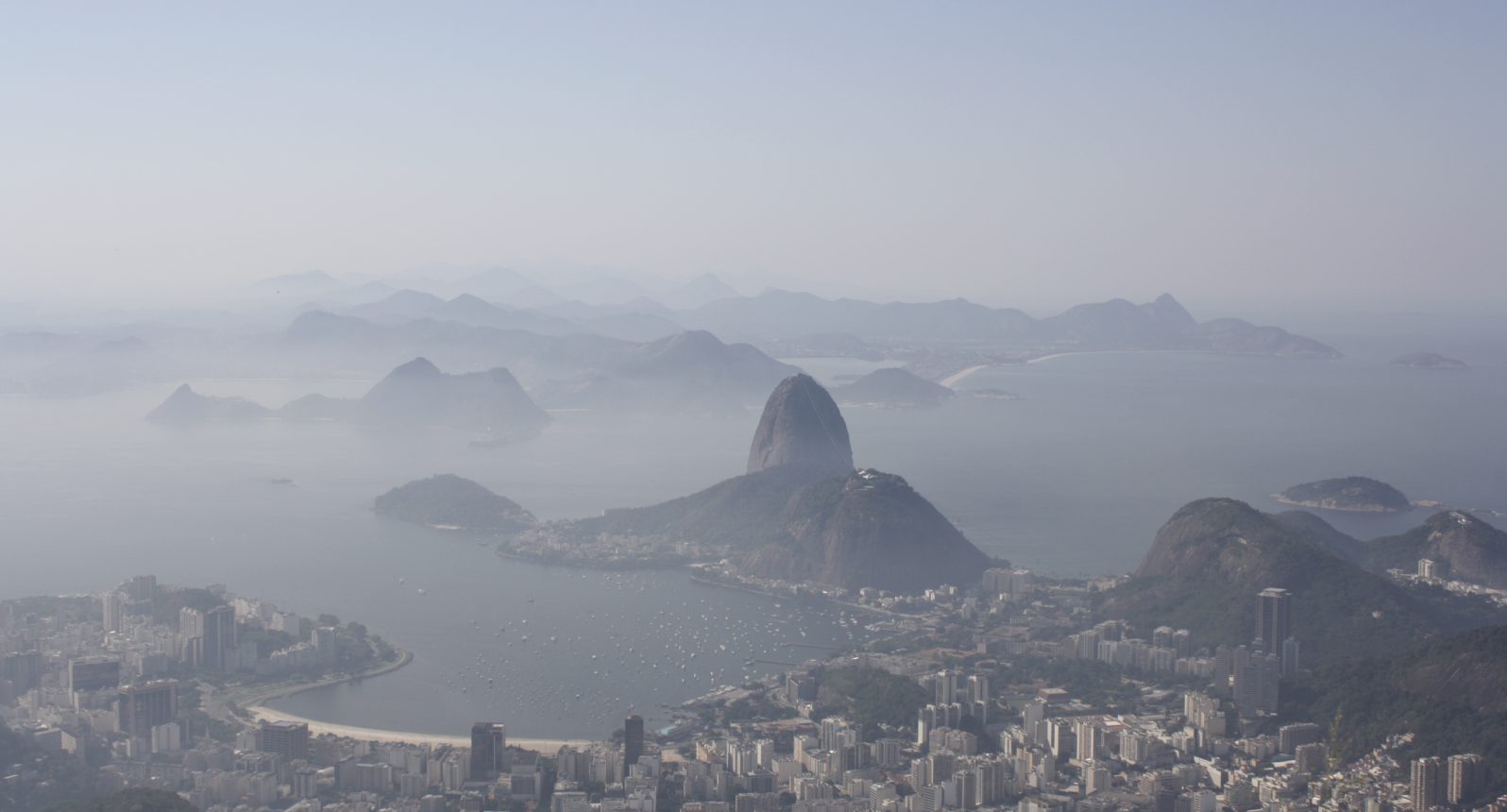 No self-respecting tourist will come away from Rio without having visited Christ the Redeemer, the statue that is emblematic of Rio. Perched atop the 2,300 feet Corcovado Mountain, it watches over Guanabara Bay, wearing an expression of utmost serenity, its arms outstretched, as if in supplication. Nearly 100 feet tall, the statue of Christ, referred to as Cristo Redentor by locals, is clearly visible from most parts of the city. Up close, its size and scale is even more impressive and requires one to channel their inner yogi, bending almost backwards to take in the sculpture in its entirety.

While Christ the Redeemer in itself is one of the most recognised landmarks in Rio, making it a favourite tourist destination, what makes this spot special are the views it affords. Corcovado mountain is situated within the Parque Nacional da Tijuca, a lush, tropical jungle situated in the middle of the sprawling metropolis of Rio de Janeiro. Visitors can reach the statue on special tourist buses or on foot, the latter reserved for the fit and the feisty who have little regard for the state of their calf muscles or the infrequent robberies that unfortunately, still occur on the hiking trails.  With a toddler in tow and comfortable in our latest pursuit of lazing on the beach, we chose to take the easiest way up – by booking the park’s tourist shuttle that’d take us direct from Copacabana beach and back.

Driving through the congested city streets, past flashy malls and crumbling classical buildings, the effect of entering the park is an abrupt assault to the senses. Dense forest rose on either side as our bus began its strenuous climb up a steep road. It was almost as if someone had changed the backdrops for a stage play. As we wound our way up, I caught glimpses of the shimmering Atlantic below and the colourful hues of a nearby favela. As we careened up a hairpin bend, I caught a fleeting glance of a howler monkey flitting through the trees.

We were met with a crush of tourists at the top, all bent (literally and figuratively) on taking the customary photo with Cristo. Once I had had my fill of Rio’s greatest icon, I elbowed my way to the edge of the monument to take in the views. What I saw before me had me so enchanted, I stood, spellbound, despite being bashed by stray selfie sticks and untowardly tourists’ elbows. Dense rainforests abruptly gave way to a concrete jungle, buildings of all sizes and materials densely packed together, sprawling off into the distance, its urban creep stalled by the sandy expanse of Rio’s southern beaches. Beyond lay Guanabara Bay, painted the deepest of blues, its surface broken by a smattering of islands. My eyes fixated on the tell-tale silhouette of Sugarloaf Mountain and I remained transfixed, unable to tear my eyes away from nature’s splendour. If it weren’t for the insistent tugging of my toddler, impatient to go explore, I’m fairly certain you’d have found me still rooted to the same spot, much like Cristo Redentor behind me.

The locals call it Pão de Açúcar likening it to the shape of the sugar blocks commonly seen in the heyday of Brazil’s sugarcane trade. Its granite peak, standing at 1,200 feet, partners with the slightly smaller mountain of Morro da Urca to form one of the most distinctive profiles on Guanabara Bay. A mandatory stop on the tourist trail, we queued up for our tickets for the cable car that would take us to the summit.

As the cable car whisked us up from the ground, we looked down to see magnificent yachts lined up in the harbour. My toddler, his face plastered against the glass and eyes drinking in every sight, squealed as he caught a glimpse of a lurid pink limousine weaving its way through dense traffic. Leaving him to distinguish the vehicles crawling on the street below, I turned my attention to the sheer granite face we were headed towards. Dedicated climbers hugged the rocky face of the mountain, a flimsy looking rope slung between them. As they became little specks in the distance, crawling up like tiny ants, I couldn’t help but feel a pang of envy. Could I have done it? With a toddler on my back?

Once we’d reached the summit, we had unobstructed, 360-degree views of Rio de Janeiro. Beneath us, unfurled downtown Rio, a tanlge of concrete and steel, hemmed in by the golden-white sands of Copacabana beach and the wild-green Corcovado mountain. Beyond lay the jaw-dropping vista of Guanabara Bay.

Over drinks, a local photographer at a beach side kiosk on Copacabana Beach had insisted we make the trip just before sunset to get the best of both worlds – the azure blue of the Atlantic by day and the glittering lights of night-time Rio. As the setting sun cast its last orange glow over the city, it began to morph. It’s as if someone had flicked a switch and the entire city lit up, twinkling lights that grew brighter as the sky darkened erasing nature’s scenic wonders and highlighting man-made delights. Definitely one of the most stunning sunsets I’ve seen.

There’s far more to bohemian Santa Teresa than stunning views to lure visitors to this hill-top neighbourhood in Rio. Quaint, cobblestone streets wind up the hill, carving their route through ageing 19th-century mansions. There’s something distinctly shabby chic about this neighbourhood, a distinctly grungy, hippy vibe that would appeal to artists and musicians. Tiny art galleries and studios pop up around every corner as the iconic tram, Bonde, plies its way up and down a handful of stops around the neighbourhood.

While it is possible to catch glimpses of downtown Rio through tiny alleys, the best vantage point in Santa Teresa remains, Parque das Ruinas, literally the ruins of an old mansion. This burnt out shell of a building, which serves as an art gallery, has been fitted out with metal walkways that lead you to the highest point in Santa Teresa from where it is possible to take in the expansive views of the city centre and Guanabara Bay. I distinctly remember climbing the steps up to the cupola and drank in the view: Sugar Loaf’s distinct shape punctuated the sky before me, while Christ the Redeemer stood tall on Corcovado before me.

My husband, who’d explored the area the day before, implored me to stick around, camera at the ready. He refused to elaborate further and sent me off with a single hint: planes. I was more than happy to wait up there, in that crumbling rooftop, its brick walls exposed. The place devoid of the usual crush of tourists, and the birdsong from the lush gardens below, formed quite a contrast to the cacophony of the traffic congested streets of downtown Rio. As I luxuriated in the views, out of the corner of my eye, I caught sight of something white and gleaming in the sky. I turned to face it and gasped. It was a plane, flying very low, barely skimming the mountaintops. It seemed to aim straight for the statue of Christ the Redeemer. I watched transfixed as it flew around it, over the bustling downtown Rio and the shimmering Guanabara Bay to land firmly on the tarmac at the Santos Dumont domestic airport that seemed to spring right out of the water. I spent the rest of the afternoon trying, in various stages of futility, to photograph the phenomenon, but learnt soon enough to give up and enjoy the experience. It remains one of my favourite memories of Rio de Janeiro.

END_OF_DOCUMENT_TOKEN_TO_BE_REPLACED 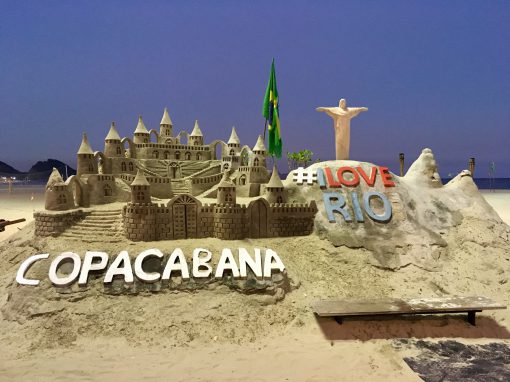